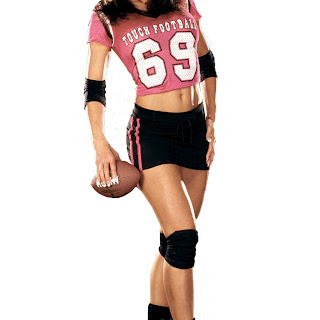 Ladies... shut the hell up sometime!! Did the dishes magically become dirty at tip-off?? Is that story that you've been dying to tell him about best told at the coin toss?? If there aren’t any fires or the repo man ain't outside, give that man some space. He knows you’re there because I’m sure you won’t let him forget. But instead of making noise, make yourself useful. Get that man something to drink...pop some popcorn... fluff a pillow or two. Call his friends over so he can have some company for a couple hours. He'll surely know you’re there then and he'll be glad for it. Give up being the antagonist. Choose your battles wisely and him letting loose 2 watch the game shouldn’t be one of them... go polish your nails or watch Desperate Housewives in the next room... and if you go to grab yourself something to drink while your boo’s team has scored a touchdown... do a little victory dance in the kitchen... he'll catch you out the corner of his eye and whisper to himself, "That's my girl.” GF 2 points... Antagonist zero!!
Message Approved by Just "J" at 8:54 PM