Being Faithful is for Suckas 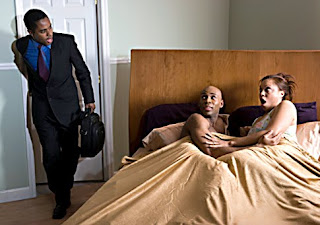 I quit... Being faithful is for suckas.  And I'm too cool to be a sucka.  I am now the advocate of cheating.  Cheating is the new high.  It's the new "jump off the bridge because all your friends are doing it."  It's the crime with no consequence.  The regret with no basis.  It's the thrill ride with no ticket needed, no minimum height to ride.  Step right up and be apart of the latest, greatest threat to all relationships where hearts are broken, trust is diminished but forgiveness is a sure shot in the end.

Have I gone mad?  No.  I've simply conformed.  I watched a special on our good ol' buddy Tiger Woods today when up until this point, I had been removed from all reports on the man.  But today ESPN really pushed my buttons.  They reported that Tiger has been on the cover of The New York Post 17 times in respect to his infidelity.  More headlines than our very own 9/11 tragedy!!  How f*ckin ridiculous!!  This sports icon, this super hero with a golf club, this well poised, articulate creature has been exposed of his transgressions and has earned as much attention as if he hit a golf ball into the moon's orbit.  There have been talks of those who are disappointed in him, about how some of his endorsements will keep him while others have turned their backs.  But my only question is, when will this cheating man be held accountable for his actions?  When is any cheater really held accountable for his (this post is strictly referring to men) actions?  What is the ultimate consequence?

I talked to this guy who told me a man's professional life shouldn't be intertwined with his personal.  Because no one is perfect and blah blah blah.  He said that all the men he looks up to have cheated on their wives: Michael Jordan, Martin Luther King, Jr, now Tiger Woods... and the list goes on.  He told me the regard he has for these men has nothing to do with their infidelity.  And all of this is coming from a man who has also cheated on his lady.  So again I wonder where the accountability lies.  Cheating celebs fuel the media while the media practically makes a mockery of cheating.  They ridicule you, they criticize you and then they're rubbing elbows with you in two months once the press dies down, the wife has forgiven you and all your endorsements have come to their senses.  These men are on the forefront of the public's eyes.  They are all we see as long as we have any connection to the outside world, hence avoidance is impossible.  We learn from their mistakes and in these lessons we see, forgiveness is a sure shot in the end.

Cheating is now an unavoidable hurdle in a relationship like an argument or a disagreement that is bound to happen.  A man cheats, he gets caught and his girl gets over it.  And if she doesn't, she dumps him and she is now miserable because aside from this escapade, he was really a great guy.  So let's just say, in all likelihood, she will forgive him because he really is sorry and understands and regrets the pain he has caused.  Ironically, my friend Rodney said on his FB status today that even if a man admits his faults, doesn't mean he learns his lesson.  So if this man moves on or weasels his way back into good standing with his scorned girlfriend, the likeliness of cheating to reoccur hasn't changed.  As there is no real consequence, no real accountablity.  At worst, a few endorsements drop you, a few grimaces at the grocery store.

So with nothing really to lose, from here on out it's conclusive, being faithful is for suckas.  And I'm just way too cool.

SB: Will a man ever step face to face with his right hand man and say, "Damn bro, you really messed up."?  Wonder if that would make a difference...*shrugs*