May God Bless the World... starting with Haiti!! 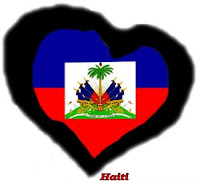 Due to the recent catastrophic disaster in Haiti, we are all in a frenzy to find family, to offer support, to embrace those near us, to be angry, to cry, and most of all to beg for God's mercy and understanding.  And whatever helps you find solace, wrap your arms around it until your heart beats are stablized and the tears have stopped flowing.  In the meantime, X out the websites, turn off the television programs and change the radio stations.  Because in the midst of all tragedies, the media will turn us all against each other.

1. Religion: Pat Robertson, a minister of the Christian belief, claimed that Haiti and it's people have brought this tragedy on themselves.  From an article on cbsnews, "Something happened a long time ago in Haiti, and people might not want to talk about it," Robertson said. "They were under the heel of the French ... and they got together and swore a pact to the devil. They said, 'We will serve you if you'll get us free from the French.'" As a religious man, this comment was indeed out of line and seemingly contrary to that of Christian beliefs.  But do we really need to focus our attention on him, or should it be redirected back to the 3 million affected in the poorest country of the Westerm Hemisphere?

2. Politics: Radio personality, Rush Limbaugh, decries the White House and Obama's efforts to support Haiti during this crisis.  From an article on cbsnews, "We've already donated to Haiti," he said. "It's called the U.S. income tax." Can you imagine at the wake of this disaster, we have a president quick to rise to the occasion ten times faster than any PAST President was able to address a tragedy within our very own nation's limits, yet there's still criticism for Obama's actions?  (FYI President Obama announced that he has committed $115 million of aid to Haiti.)

3. Good intentions: Good samaritans are often misguided due to an influx by local news stations suggesting how to help.  In their relief effort, many people are preparing care packages and collecting clothes, food and medicine to send.  Well please unpack it all.  Help Haiti with Money, Not Stuff.  This "stuff" ends up being a hodgepodge of goods that pile up taking up limited facitilies needed for the wounded.  "After the war ended in Bosnia, 17,000 tons of inappropriate donations had to be burned, according to Pharmaciens Sans Frontieres."  Please don't use this tragedy as a chance to do some spring cleaning!!

4. Indifference: I read a rather interesting article, Dear Haiti, by my homeboy JD about the emotional detachment of people during cataclysmic tragedies.  While he spent his day at work pouring over the videos, the photos, and the news articles about Haiti, he scanned his office to find people performing their day to day duties as if a crisis isn't on our hands.  And that is exactly why I suggest you all "turn the channel."  This is a time to unite in what JD describes as a "oneness amongst all living things."  Not a time to find what seperates us and makes us different.  We all deal with tragedy differently and since we do not mourn in the same ways, let's not point fingers at how the next man deals with this tragedy.

The real focus here are the people in Haiti who need all the help, support and medical attention they can get.  Don't let the media do its job brainwashing.  X out the online articles, turn the tv off and switch the radio stations... oh and pray to whoever your God is.
Message Approved by Just "J" at 6:05 PM