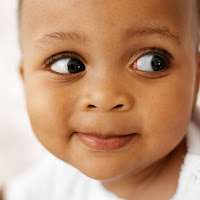 Firstly, I would like to point out that I have no kids! And not by accident, I intentionally have NO kids. And after doing a forecast of my near future, I see sunshine, a few clouds and still NO kids. And the sole reason I see NO kids is because I checked that finger in between my middle and my pinky fingers and noticed no bling bling, no sparkle, not even a twinkle. As corny as it may seem to you, I will not have kids until I am married and when you see me on The Tyra Show having triplets at 42, you can say, damn I knew that girl…

But instead of tripping on me for ignoring my biological clock with an expiring snooze button, let’s draw our attention to baby mamas. I would be remiss if I didn’t at least acknowledge the different categories of baby mamas. You have:
A) Mothers of children of men who have good paying jobs, who have their kids and this woman in his best interest or at least lives in the same living quarters.
B) Mothers who have children by one man and has found happiness with another man who she may have married, lives with or has a lasting relationship. And then there’s
C) Dumb @$$ baby mamas whose baby daddies ain’t ish, will never be ish and its no surprise because when she met him, he wasn’t ish!!
The focus here will be on Baby Mama - C.

Who the hell told you it was ok to let yourself be impregnated by a man with several kids, with no job, no car, no independent living situation, an electronic ankle bracelet, a wife, missing teeth, locked cornrows (you know the kind that look like it was braided 6 months ago and never touched again), this list is endless… which is why I have developed the baby mama checklist for all the potential baby mamas who insist on having babies for God only knows what reason. I will only list 5 basic criteria, but feel free to add to the list for the sake of not becoming the latest statistic

1. If you wanna beeeee with me, gotta have a J-O-B – yes love knows no boundaries, but babies know no broke. And since diapers cost money, formula ain’t cheap and healthcare is a necessity, you AND hunny dip should have a job. And no rinky-dink minimum wage job. $7.25 an hour may support his sneaker habit and maybe it satisfies your hair, nail and feet pampering… but it doesn’t hardly suffice when raising a hungry, pooping infant.

2. These boots were made for walking… and cars are made for driving – If you live in NYC, a car is a ridiculous burden to attain but just about anywhere else, a man should have a dependable vehicle. And not saying that good men need to have cars. But good men need to have cars. Simply because owning a vehicle supports the perception of independence. If you go into labor, will he have time to borrow his mother’s car while she’s all the way at BINGO?

3. Papa was a rolling stone, where he laid his hat was his home – ummm yeah, no… won’t work here. Backpacking in Europe should be the only time he calls multiple places home in such a short time period. If he doesn’t have a stable living situation, how can he have stability in supporting a family? And living with parents/family isn’t so bad when he’s taking care of someone sick or if his name is on the deed and people are actually freeloading off him. But if a pillow and blankets rest in the corner of the couch and he has to wait until his little cousin finishes watching Cartoon Network before he can go to “bed,” something ain’t right.

4. Maury: You are the father, you are the father, and you are the father of this one too – When a man has kids, plural, no wife and has never been married, this is a dead giveaway that you will ALSO not be a wife. I mean there’s a possibility he’ll wife you, its just not likely!! Tell hunny, jr, and jr jr that you’ll catch them on the flip side, turn around and JET.

5. Presentation is everything – another dead giveway, obvious even before the initial conversation, is a man’s appearance. My mom tells me I’m shallow for looking at a man’s footwear even before I look at his face. But a man’s appearance means he cares about how he looks which represents charisma, character, confidence and a whole bunch of other C words that may help you determine if this cat is a good catch!

And a bonus I’ll just throw in for free is: If a man already has a happy family and he’s looking for some one niter nookie or even a continuous flow, heighten your standards above side piece status. Why risk getting pregnant by someone else’s husband who will resent this kid and you? Don’t birth a baby into an outcast situation.

If you use this checklist as steadfast as the damn DMV with their 6 point rule, you are almost guaranteed to have the intent to find a suitable baby daddy… or what the hell, go for the gusto and build a real relationship, get married, live together and then have a baby… now we’re cooking with some grease!! EYEListen.

SB: What ever happened to condoms and contraceptives!?!?!  There's even the PLAN B!!
SB + SB: And if you do end up in a dead beat baby daddy situation, refrain from dragging his name through the dirt cuz ya choices are a reflection of you.... you can still be a good mother without kicking his back in.
Message Approved by Just "J" at 11:01 AM