Crazy are the Most Moral

What do Baltimore’s homosexual gunman and Gotham City’s worst nightmare have in common? They wade in a pool of moral consciousness most of us wouldn’t find if we slipped and drowned in it. In David Simon’s HBO thriller The Wire, Omar Little, better known as Omar, is an overt homosexual, who robs drug dealers for a living just to prove a point. In season one, Omar testified in open court against the Barxdale crime family for the murder of an elderly man in the neighborhood with no hesitation. Omar is profoundly aware of the life of crime that he lives and the players in this game.

A soft voice says, “Run ya’ll…Omar...Omar is coming.” These whispers echo in the streets anytime his presence is felt from miles off. He is by far the single most feared presence in the streets of Baltimore, and even with his villainous behavior, he had the moral sobriety to stand up in court to testify against D’Angelo Barxdale for the murder of a man who “wasn’t in the game”. The morally corrupt and ethically diluted ideology of “stop snitching” went out the window when being a human was more important. Omar knew that this man was killed over nothing but reckless irreverence for human existence. If you were in the game, you were an open target to Omar, but he left civilians alone.

Much like Omar, the Joker of Gotham City terrorized the streets of his hometown in extravagant fashion. He too stole from “white collar” criminals just to prove a point. There was a beautiful moment in the Dark Knight when Joker slid down a pile of money stacked to the ceiling, got up, took a few steps, turned around, and set the money on fire. The symbolism of this was of planetary proportions. Money is the silk with which we stitch our egos, and to pull a loose thread much less burn our psychological foundation is simply dissident. A man, whose actions are inherently malignant, yet at the same time morally calibrated, was able to see that these men were ruled by malfeasance and greed. He saw through the creation of self entitlement that could only end in peril and insignificance.

Omar and the Joker do not by any means fit into "society’s" standards of normalcy. Omar is walking urban paradox. On one hand he will kill your entire lineage with a 12 gauge shot gun, and in the same breath tongue kiss a man. And it is this man who will stand up and testify in court because it’s morally right. The Joker torments the most average of people in Gotham to get the attention of Batman for this eternal tug-of-war, but will burn millions just to prove a point about the toxic levels of greed certain men posses. There is absolutely something to be said about this. Maybe we should look more into the brains of “outsiders”. 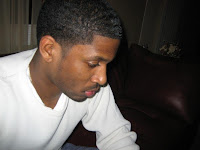 Johnathan Dixon is the Creator of Headless Giant Magazine, and is also published in Limite Magazine, Industry Plug, Mylifemyhiphop.com and Recruit Zero.com.  He is a realist, a social ball of laughs, and one of my dearest homeboys.  Read more of his blogs.