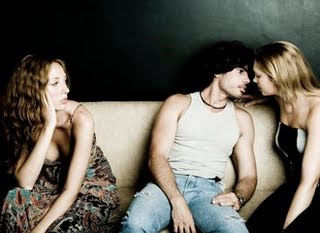 Ever been the chic on the side?? It’s all fun and games until somebody wants off the back burner.
Ever had a main girl and one you cared for on the side?? Sweet deal until things hit the fan.
Ever find out you were sharing your man’s love. Poor thing…

Let me break this one down in roles:

Role-The guy: Unsatisfied is his M.O. Wifey is a good girl and he knows she’s not going anywhere. His main relationship may have dulled and the spark is nearly gone. But there’s the comfort zone, the sense of security that he refuses to give up. Plus it’s guaranteed loving. To give that up is sheer buffoonery.

The Hard Part: He now has two girlfriends. He has to call both, take both out, make both happy. He has to hear two mouths, deal with two sets of hormones and has to keep up with double lies. Even though he shouldn’t have to lie to the side chic, he’s in so deep that he actually cares about her feelings. And what’s the #1 reason a man lies, “Oh I didn’t want to hurt your feelings” smh

Role-Side Chic: She saw a fun ride and decided to hop on. Didn’t care that he had a girl because she wasn’t looking for a relationship anyway. She’s laughing and joking and having a good old time. She knows who he goes home to and doesn’t have a chance to be jealous because he has put in on her so good that she’s asleep before the door slam locks.

The Hard Part: She catches feelings. Now the grass is greener on Wifey’s side and she wants what wifey gets. It’s a catch 22.

Role-Wifey: Poor thing. She’s unsuspecting though she knows things have changed. She has a ton of authority so she can pop up at her boo’s house whenever. But she never discovers anything. So she steps her game up, buys a new outfit, gets her hair done, hoping things will be better.

The Hard Part: She finds out the truth. Now she can dump the bastard, sing “I’m Every Woman” become a feminist and bash men for the rest of her life. Or she can stay with her man, try to forgive him while singing Beyonce’s “Resentment” and try hard to forget it all. Either way, she’s the latest addition to the “Women Scorned” list.

Is this a personal experience or did I observe this one? Let’s just say I was the not-so proud owner of a screen tee that read, “My boyfriend’s girlfriend hates me”

SB: As the side chic, you never know for sure if you even had real feelings for the guy or if it was merely the chase you fell in love with…
Message Approved by Just "J" at 9:23 PM