Snitches Get Stitches: Should the side chic tattle? 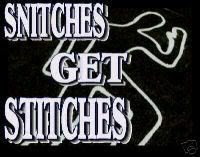 So now that I’ve been on both sides of a "him, her and her" situation. I want to pose a few questions. Why tell his girl? What are your intentions?  Do you want him to dump her for you? Do you really think he’ll want you over his girl? Are you so bitter that even though you don’t want him, you don’t want him to be happy either?  Or should the side chic play her position and remain the silent ride or die chic?  I am honestly torn.


Perhaps society has had an unhealthy influence on our development that we honestly believe snitches should get stitches regardless of the situation. If your best friend was a victim of a hit and run, you would want the witnesses to come forward. If someone stole your wallet out of your gym locker, you would want someone to fess up. So why have the truth compromised because of some gangsta code, nursery rhyme?  If a side chic becomes loose at the gums, go with one, two or all three "B's".

Be objective: What if we look at the side chic as a victim as well? She fell for a guy who told her either he was single or that his relationship was on the rocks. She finds out in the long run that she was suckered and her feelings are legitimately hurt. So out of anger she rats in an attempt to rectify a messed up situation and to expose the jerk that has caused this turmoil. She has some truth that needs to be revealed. This man’s girl needs to know about the man that she loves who has selfishly enjoyed the loving of another girl.

Be hurt: The side chic reveals all the chilling details of a cheating man leaving the gf hurt and confused.  Angrily, the girlfriend starts creating all these theories to rationalize why the side chic has come forth. She thinks the side chic is so brutally honest because she probably expects the gf to dump him, leaving him wounded and vulnerable for her to be his crutch back to health; she's probably the one who initiated the affair because she saw a good thing and didn’t care that he had a girl; or maybe she think she deserves him more because she figures she must have what he needs, otherwise, he wouldn’t have cheated in the first place.  So she seizes the opportunity to reach out seeming like a concerned sista looking out for another sista.  Just curse them both the hell out!!

Be grateful: The truth is out. And the only truth you’re going to get from her is what that man did wrong. You will never really know her thought process nor can you decipher her intentions. She has given you a truth about your bf that only she can provide. You are the appointed trial and the judge to determine if the circumstantial evidence is enough to cause a break up or to be considered just a hurdle in the relationship.

Aight well I did my due diligence in trying to analyze the situation. But the only "B" I find to be conclusive is... that B*TCH is probably a hater… (Hey, I’m human) EYEListen.
Message Approved by Just "J" at 12:05 AM