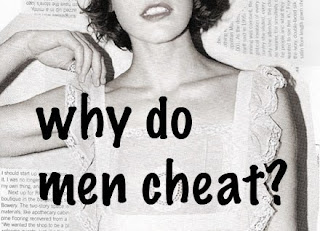 So as a follow up to the riled up emotions I expressed yesterday, I want to express some ideas I’ve had about why a man may cheat. In immediate frustration with the topic, I want to go in on a rampage bashing every man that cheats on his lady. But I’ll take this slow and really try to focus on a few key points…

Insecurity- cheaters have self confidence issues. Even the cute guys need that reaffirmation on a regular basis. (He's the guy who says, nah, girls don't like me... or girls don't think I'm cute... with hopes of you chiming in, Oh baby you're a hottie!!)  Meanwhile, he falls victim to every pretty face, or "fatty", that shows him some attention. Now for you less attractive guys who’ve been "ugly" (socially standardized) all your lives and never got a chance wit the “baddest” chic on the block, we know your M.O. You grew up, bought some defining gear (clothes make the man??), got a mean swag and now the ladies love you. And you’re overwhelmed that even though you've found the girl of your dreams, you can’t believe all the options you have before you. This overwhelming sense of importance just further feeds your selfishness… which leads me to my next point...

Selfishness- Every cheater is in it for himself. Unless the chic you’re cheating with is a millionaire and you’re letting her trick on you so you can send your girl through med school... you got your own interest at hand. Grow the hell up!! The world stopped revolving around you the day you were born. Your infidelity is baffling and your audacity is sickening. What’s life if your whole moral standing is built on quick sand and your consideration for the woman you love is faltering? You’re a parasite festering on the lives of people who care for you. Grow a set and stand on your own. (my bad, got a little frenzied)...

Dependency- Many men deny being a momma’s boy. But if you’re moving from one girl to the next and many of these relationship are overlapping, here's the underlying blame: It’s all your momma’s fault. Don’t get me wrong, I love your mommas. But clearly, she has created a monster. You fear being alone. You fear not having that someone there to wipe your boo-boos and hold your hand. But you’re too grown to still be suckling on your momma’s bosom so you turn to the next best thing, your woman. You feel secure knowing that wifey is home waiting to nurse your wounds of the day. Some wounds that have been inflicted by other women. And being the good wifey she is, she will always be waiting for you with open arms, at least until the day she smartens up.

Which brings me to my last and final focal point behind cheating men... WOMEN.

Women- Fool me once shame on you, fool me twice shame on women. Forgive a cheater one time and one time only! Because every time after that, it is at your own risk. A man can’t continue to cheat on a woman that has left his sorry @$$. So the more you forgive, the more you invite the abuse. If women aren't such pushovers, men wouldn’t be able to prey on our vulnerability. If a man hasn’t confronted the damage he has done to the relationship or to us mentally, and neither has he reconciled, how can we grow or move forward? No man learns a woman’s worth from a woman who hasn’t learned it herself. EYEListen

SB: I honestly believe there is no excuse valid enough to cheat.  Not the overwhelming tempation, not the lack of fire in the relationship, not the good ol', I tripped and landed in her... Men, honor your woman or turn her lose to a man who will...
Message Approved by Just "J" at 7:16 PM