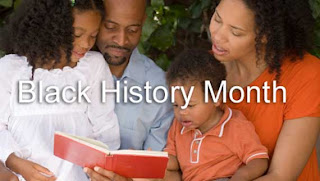 Happy celebration of the first day of the month acknowledging the very thing we, MY BLACK PEOPLE, acknowledge everyday of our lives.  Today begins the first day of 28, and 29 when we're lucky, of Black History Month.  So here on my personal space, I want to do my due diligence and pay homage.  So get ready for some Power To the People, some right on you jive turkeys, some whopping and running mans, some Lift Every Voice and Singing, some My name is Kunta... Kunta Kente, some my momma used to make me pick the switch off the tree to beat me with, some yeah I'm black and I can swim lol... just a bunch of everything we share as a people, ya know.  I especially want to touch on some issues we still deal with everyday... interracial relationships, my president is black, health issues targeting our race specifically... I even want to talk about homosexuality (watch out now)... so without further adieu, a tip of this month's iceberg.

For those who skipped history class, no worries cuz they skipped OUR history: 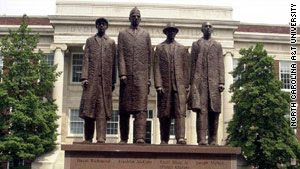 Check out this article on the sit-ins and how they all began.  In short, 50 years ago on this very day (Feb 1), four brave black men sat at the lunch counter of the whites-only Woolworth in Greensboro, NC.  Becoming known as the Greensboro Four, these men began a revolution recruiting both blacks and whites to follow suit with these sit-ins.  Spreading across the south and beyond, that Greensboro lunch counter desegregated their establishment in July of that same year.  This was an important catalyst of the Civil Rights Movement!!