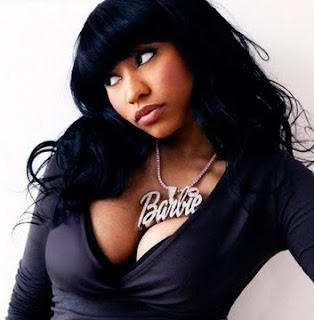 Nicki, Nicki, Nicki. To like you or not to like you… that is the question. Ok, let’s cut to the facts.

Now as far as my opinion goes: blankness! I’m honestly at a loss for words when it comes to this chic. I like to consider myself a realist. I know how to be objective: a pessimist and an optimist all in one glass. So I’m approaching this based on THAT and my history of love for females in hip-hop. Let me glorify my “credibility” when it comes to female rap artists, then you can decide if I have a respectable opinion...

As I type, I am listening to the Miseducation of Lauryn Hill, I can admit to doing the Salt-N-Pepa dance (yes, the one down on the floor with alternating hands in the air), you can start off rapping “I know a dude named Jimmy” and I can finish with “who used to run up in me” (sorry mom), and I forced myself into believing I enjoyed the sitcom Eve since I was huge fan of Ruff Ryder’s First Lady. Furthermore, “Instinct leads me to another flow, every time I hear a brother call a girl a b*tch or a hoe”, Fox Boogie made me proud to be called J Boog AND I had a crush on Da Brat (no homo lol).

Ok, with that out the way, I’m sure you can vouch for my credibility.

So what is it about Nicki that makes her a good entertainer? For one, Nicki appeals to both the ladies and the fellas… in the bedroom and on stage. She got a nice shape, cute face and this whole Harajuku Barbie image is killing right now. And keep it real, her lyrics aren’t that bad.

Song: Five Star Chic
Five little mama, you a Three star
I aint sleepin' when I say I'm in my dream car…
Simple, cute, and relatable. On the flip side, there’s obviously no depth, no thought needed. Is rap even focused on depth anymore? Maybe to old school hip-hoppers but the future generations just want something catchy.

Song: Grindin Makin' Money
I keep a gentleman first, nine benjamin
dont mess with washington
dont mess with abraham
patty cake, patty cake better get the baker's man
frosted flakes is on my fingers fruity loops is on my wrist
fruity pebble barbie pendant dont forget to ice my kiss…
Bubblegum rap is, whether we like it or not, the wave of the present/future. Nursery rhymes were made popular by our good friend Nelly and carried on with ya boy Cam. Why not let a female with the Barbie doll image spit a lullaby? Nicki has mastered the ditzy, airhead rap and with Wayne endorsing her, she’s a sure shot.  Wayne hit the jackpot snatching her up.

When I first saw Nicki at a Wayne concert I swore, Scouts Honor, I would never sing a song of hers, never watch a video of hers, never even bop my head. Ohhh well, I was never a girl scout anyway. *shrugs*

My homeboy’s girlfriend has a Nicki song, ironically, playing at this very moment (actually the last 10 minutes, she got it on repeat) and… I like it.  Sorry Lauryn and Queen Latifah... but don't blame me, it's this damned rap music.

What can I say... I've crossed over into the dark side.  Now don't you succumb to this BS... we can't all be victims lol 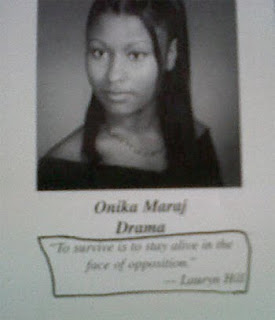 Awww she was a sweet looking girl
Message Approved by Just "J" at 1:16 AM

Email ThisBlogThis!Share to TwitterShare to FacebookShare to Pinterest
Labels: music