I have been coming in contact with so many females who are just oblivious to how to play their part. Seriously ladies, we need to start taking pages out of the males’ books, using our common sense, and stop making things so complicated. Because guess what… THEY AREN'T.

So if you are worried about an ex and what he is doing with his life, insecure, needy, an over-analyzer, and/or wonder why after 3 months of dating a man, he no longer wants you and you have put “SOOO” much into the relationship:

Here are a few helpful hints to follow because the mockery has to end.

3. Be confident in yourself, because no man wants a woman who is insecure about herself or their “relationship”. Hold yourself in the highest esteem at all times. If you don’t think you are gorgeous, guess what… NO ONE ELSE WILL EITHER! Hence the reason “you ain’t neva met a chic like me… and you NEVER will”-Da Best®

4. Don’t be so accessible. I have been in something like a long distance relationship (For the record he is NOT my man) for over a year now. I’m not going to lie, it definitely has its flaws and downtimes. But when we see each other, even if it’s for a few hours, that time is EXTREMELY precious. Give that man some time to breathe, some time to miss you, some time to hang out with his friends and brag about his “girl/shawty/boo/friend”. Think of yourself as the hottest song out on the radio right now… after hearing it so many times what happens? It gets played out and you skip to the next track. “On to the next one”. Trust that he will do the same.

5. And just because the # 5 is the bomb-est number ever, I saved Da Best® one for last. HAVE FUN! Live life, enjoy every moment of it. You don’t have to analyze it, just let it happen. Don’t question why you love or like him, don’t let your family/friends influence your decisions, just do! Life is too short to be worried about others opinions. Like my Weezy says…. “Fu Fu Fu Fu*k your feelings”

Bonus: Love yourself over all others if for no other reason than because I love you! 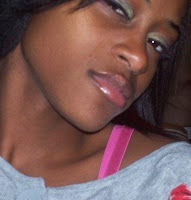 Surae, aka Da Best, is my California dreamin' roll dog!  This Jersey girl turned West Coast diva is as real as they come.  Her candid, no nonsense attitude makes her 2 cents priceless.  Corporate by day, rockstar by nite... and a realist by right!

Thanks Rae for serving it raw, no BS added!
Message Approved by Just "J" at 2:45 PM