The 7 Guys I Dated 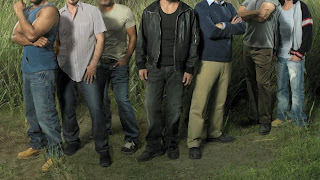 Here's a list of 7 types of guys I've dated:

Turtle shell: This is the guy who let me do and say whatever I wanted to. And to avoid confrontation, though I don't like to think of myself as confrontational, he dealt with it. He had no real spark and provided no real excitement. He's like the substitute teacher that you love but don't respect.  I liked this type of guy but as all Geminis know, we get bored quickly (some call it A.D.D. lol).

Passive guy: Similar to shy guy but he had more spunk. He usually laughed things off but he at least made it clear if something bothered him. However, he'd chuckle right after to avoid the awkward tension. He's fun because he's down for whatever. But he can't really put you on to anything new because his catch phrase is "Well what do u wanna do, where do u wanna go..." Boring!!

Sex symbol: He jus wants to bone.  He's not spending on much more than a burger and a shake before he makes it clear that he has some good movies and a bottle of patron at his crib. He's so overzealous like a 12 year old boy who saw his first boob. I can imagine his sex game to be wack because anybody THAT anxious can't have more than two good strokes before he's smoking a cigarette.  The date usually ends somewhere after the shake.

Loverboy: Oh he's a sweetie. We had good times and he's not scared to let you know he digs what we got. But he liked me, and her and her. Girl crazy!! He's jus looking for love but doesn't believe it comes from only one girl. He's fun but a heartbreaker if you get too close. And he won't even think he did anything wrong.

Reverse midget: Instead he looks like a man but behaves like a boy. Very rebelious. Has a better way of doing EVERYTHING. Often offended by feeling his "manliness" is being threatened. He wants a girl slash personal entertainment provider. On a rampage to take the world by storm but often falls short.  You can't knock a man for trying but this one got knocked to the curb.

Missing pieces. This guy has it all minus one (or two). He has a job, but bad credit. He has a nice car, no job. He has no kids but has a girl. Great convo great body and great ambitions but even greater is his time left n the penn. He's often appreciative if you overlook his shortcomings and will love u tons. But the shortcomings often overpower and can no longer be ignored.

And the last and final guy I dated is, uhhh, let's call him Prince Charming. What puts him above the rest isn't that he's perfect but the fact that he's real, both his heart and his intent. Can't tell you how this one ends because we haven't finished dating =)
Message Approved by Just "J" at 11:32 PM