The One on the Side, Tells Their Side: Edition #1 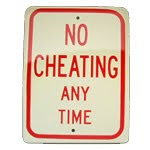 This edition will begin a series of episodes where that good ol' cheating goes bad.  I'd like to think of this as my "Challenging Cheaters" Movement.  If this kind of stuff doesn't get a cheater to think twice, nothing will.  So in the famous words of Mr. Heathcliffe Huxtable, "CHA-LLENGE!!"

Check out this article where a woman posts billboard ads in 3 major cities revealing loving photos of her and her married-man boyfriend.  The billboard also displayed a website that has albums of photos and love notes she had received from her beau.  And before you go throwing her under a bus, she was honestly under the impression that this man had divorced his wife years ago.  She has traveled with him, attended family functions with this man and had been dating him for 8 1/2 years.  When she got tipped that he is still married, she hired a private investigator and found out it was true!  She insists she didn't post these billboards in an act of revenge but instead to let everyone know she refuses to be cast as the "other woman." 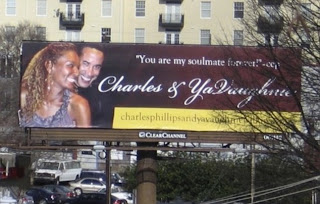 Not everyone is a fan of public displays of affection... now for all cheaters, how's that for PDA??

SB: Found a better article on Revenge by Billboard
Message Approved by Just "J" at 8:04 PM