EYE See Why You Love My Eyes

"Look me in my eyes... and I'll take your word"
How many times have you heard or even said these words before accepting or rejecting someone's word??  As if magically the truth will go spewing from their pupils revealing their deep, dark secrets. As if the connection of their eyes to yours forms an invisible lie detecting filter.  As if every convicted murderer breezed by the polygraph and the Bible but couldn't help breaking down at the glare of the prosecuting attorney.  But yet it's still so believable! The power of the eyes outweigh any other facial feature, bodily expression or unique flavor of personality.  It's like the binocular view to the soul...

I was driving to my train this morning ("my train" like I own it lol). And on the way I heard a commercial about preventing the eye disease glaucoma simply with regular eye exams and early detection. But what if you don't have regular exams at your disposal?  What if your idea of regular is the frequency of a lunar eclipse... What if you heard that commercial too late... This led me to imagine a world without vision (literally and figuratively). Shit!! Its one thing to be born blind and not missing something you never had. But to go blind after a life of love at first site, deja vu, witnessing miracles.... SHIT!!  Like a race horse who goes blind, somebody please put me to sleep! 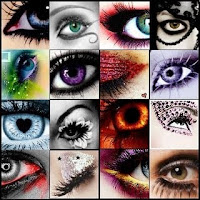 The other nite I was catching up on some DVR'd ANTM... Ya life is void if you don't know this acronym. I'll  wait while you google it cuz I refuse to elaborate... Ready?? So yeah Tyra was teaching the girls about smiling with their eyes and how much it impacts their modeling. The energy, the story, the imagination behind emotionally fueled eyes is orgasmic.  The lustful surge between a man and woman, the unyielding trust between a mother and child, the magnetic force between a man and his PS3... Wow, I'm getting chills.

Ok ok I'm rambling but in the past few days the eyes have increasingly been on my mind (and on my face... I'm corny, shoot me lol). I was talking to a friend about getting a tat of the Eye of Providence from the dollar bill but its so deeply associated with free masonry, of which I'm not, so I abandoned the idea. Maybe I'll jus get the eye of willEYElisten. =)

Last but certainly not least, the Motivation for this Post Award goes to my buddy who sent me this pic: 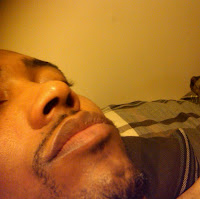 Many would have deleted this self imposed off frame shot. But I think its perfect! Of course he was tryna get his sexy on with this lip shot. But I love it simpy because neither eye is revealed. The left eye is almost visible, showing just a beautiful eyelash or two. But the other eye is completely out of view giving this shot a deeper mystery. Sparking lust and desire to know where those eyes are and what's behind them. To find out the truth that will magically come spewing from his pupils...

I'm going to share a secret with you... I tried tilting the pic a little to see if I could manage the slightest peek at his eyes *BBM embarrased smiley*
Message Approved by Just "J" at 11:44 PM